Lord Sri Lakshmi Narasimha at Parikkal is our family deity and have been visiting this place for, well since when I was born. Among the various forms of Lord Maha Vishnu, the fourth Avatar (incarnation) as Narasimha is quite special.

When the Four Brahma Kumaras (they were Manasa putras, meaning born out of the mind of Lord Brahma) - Sanaka, Sanandana, Sanatana and Sanatkumara came to visit Sriman Narayana at Vaikunta, His bodyguards Jaya-Vijaya refused them entry stating that the Lord was resting. Outraged, they cursed them to be out of the celestial world. The duo reached the Lord’s feet and sought mercy, however the Lord himself could do little about this curse. However, He gave them two choices. Either be born as a devotee in seven births or be born as an Asura in three births to fight the Lord Himself. That the duo couldn’t stay away from the Lord for seven births, they were born Asuras - In Krita Yuga as Hiranyaksha (killed by Lord Maha Vishnu's 3rd Avatara as Varaha) and Hiranyakashipu (story below). 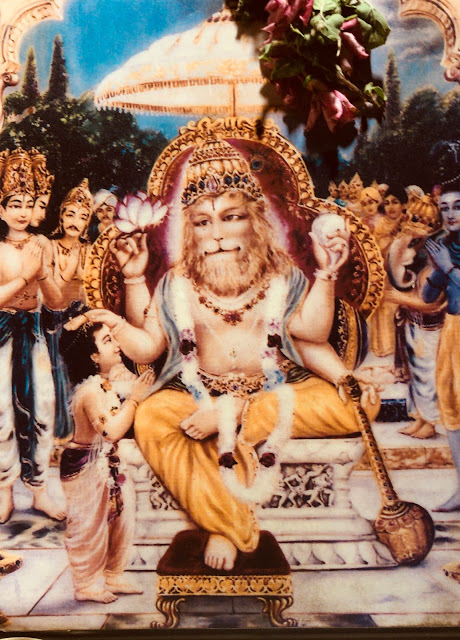 Hiranyakashipu was a very learned man and did a lifetime penance such that he could never be destroyed by any force created on earth such as no animal or man could kill him, he cannot be destroyed in the day or night, inside or outside his house, no weapons could destroy him and so on. However, the Lord had other plans, as always. Hiranya was blessed with a Son who was named Prahlada who was a staunch devotee of Lord Maha Vishnu even since he was in his mother’s womb, for his mother stayed at the ashram of Sage Naradha and was tutored Sriman Narayana’s nama all along. So, when He was born in the Earth, he continued to be the biggest devotee of Sriman Narayana. His father Hiranya wanted Prahlada to believe that he was the real Lord which Prahlada always refused to agree.

Enraged, Hiranyakashipu asked his son to prove where He was right now, if He is always around for which Prahlada replied he is in everything that is created in this world. When Hiranyakashipu breaks a Pillar, a unique creature comes out of it. A Lion with a human torso walks gigantically even as the 14 worlds shudder, which pulls Hiranyakashipu on its lap, sits at the entrance of the house and kills Hiranya with its sharp nails. And all this happens at dusk: 5.45pm – 6.30pm which is in between the day and night. The creature is none other than Lord Narasimha – Nara, meaning human and Simha meaning a Lion.

The entire cosmic world was terrified at this instance because such a thing had never happened ever before. Lord Shiva & Brahma, Goddesses Mahalakshmi, Parvati, Saraswati, and all other Devatas prayed to the Lord to calm down to which He obliged. Therefore, Lord Narasimha has always been associated with removing the negative energies in the world and setting things right. Daily obeisance to Lord Narasimha is said to salvage the life sins of humans and help them attain moksha at His feet. He is also the most benevolent forms of Lord Maha Vishnu and is seated in three forms – Abhaya Hasta with Goddess Mahalakshmi on his Lap, Yoga Narasimha and in the form of tearing up Hiranyakashipu.

Parikkal Sri Lakshmi Narasimha is a temple which is considered over 1,000 years old and has inscriptions of the “fish” which is associated with the Pandya Kings of South India. Goddess Mahalakshmi is seated on His left lap and also has a separate sannidhi where She blesses devotees as Goddess Kanakavalli.

Among the various slokas, “Runa Vimochana Stotra” is one of the most powerful ones which will relieve one of their debts. Debts here do not just mean financial ones, but the debt that we leave pending birth after birth and keep coming back to relieve them. Regular chanting of this sloka will have very positive outcomes and I am a beneficiary of this sloka.

Temple Timings: 6am to 12.30pm; 4.30pm – 8.30pm
Avoid Weekends, for they are just too crowded. Weekdays are relatively less crowded.
Thirumanjanam (Abhishekam) is performed on all days but with prior booking only. Contact the Temple Priest Sri. Sundara Varadan on his mobile number +91 94446 48309.

Temple Prasadam is usually provided as part of the Thirumanjanam which includes Sweet Pongal and Panchamrutham. Additional prasadam items such as Puliyodarai and Curd Rice can be requested in advance which would be provided upon additional payment. 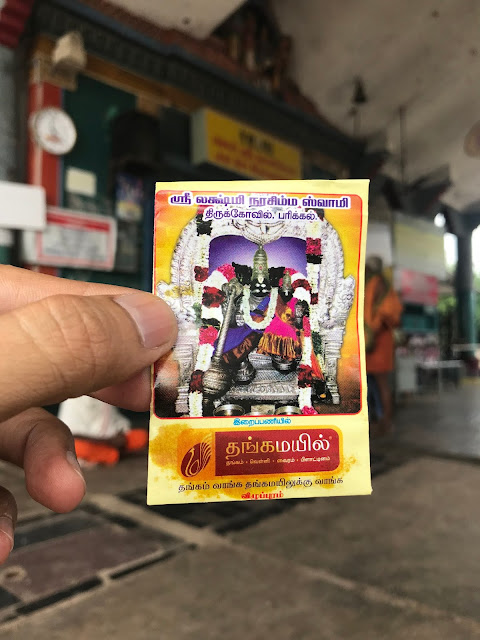 By Road:
On the Chennai Trichy National Highway, the village “Parikkal” can be spotted just after 20 kms from Villupuram towards Trichy. You will see JCB Earth Movers Showroom followed by Café Coffee Day both on to your left side and Truck Lay-bye also on the left side. Immediately after that, there would be medians placed on the road for vehicles to slow down. A 20 feet statue of Lord Hanuman can be seen on the left side, and the road opposite will take you to the temple premises. You will pass through the railway track connecting Villupuram – Trichy.

Taxis are available from Chennai & Trichy Airport, from Villupuram Railway Station and Bus Stands. There is no accommodation at Parikkal, however a few good hotels can be found at Villupuram town. Do refer here for details.

From Chennai, this temple can be covered in a single day between 6am – 9pm with a few other temples midway.