Lord Ganesha, fondly known as Pillaiyar is the elder son of Lord Shiva and Goddess Parvathi. 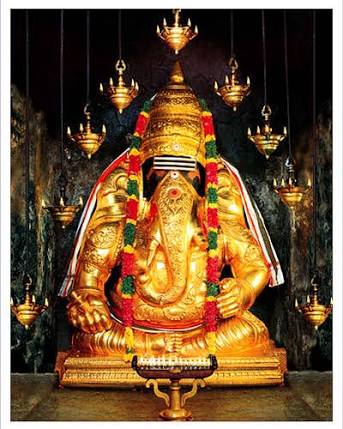 When Lord Shiva wanted to visit Goddess Parvati, he was stopped by a little boy. Out of anger, the Lord chopped off his head. Parvati, angry with the Lord asked him to replace the boy's head with the first living being that He saw immediately. And thus, Lord Shiva ordained an Elephant head on the little boy who became Lord Ganesha. This was yet another Tiruvilaiyadal (Celestial Drama) by the Lord himself among various such acts.

Lord Muruga was born out of Lord Shiva and was formed as six beings, who was brought up by six women. On the other hand, Lord Shiva knelt down and heard Lord Muruga explain the meaning of the pranava mantra - OM, yet another Tiruvilaiyadal of the Lord. This act was to tell the world that anyone can be a Guru regardless their age.

Here are the links of Pillaiyar & Muruga Temples;