It is believed that the first Shiva Linga idol on Earth came up in this small quaint town in present day Tamil Nadu and was established by none other than Lord Brahma himself. The town is named Utra-Kosa-Mangai as per ancient Tamil scripture. Utra means secret; Kosa or Gosha is the “Pranava Mantra” and Mangai means lady / woman. This is the place where Lord Shiva explained the meaning of the Pranavakara to Goddess Parvati and further proceeded to Madurai for their celestial Marriage. 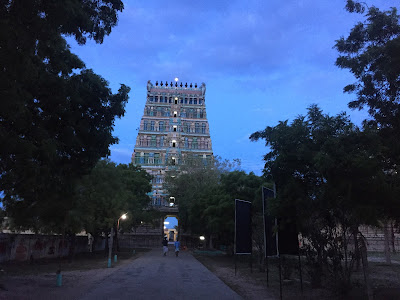 The idol of Shiva Linga is estimated to be 3,000 years old – somewhat coinciding with the establishment of Kali Yuga. The deities here are known as Goddess Mangala Nayaki and Lord Sri Managala Nathar and the temple premises is spread over 20 acres! Constructed in the Dravidian style of architecture, the temple was built and managed by the Pandiya Kings and the town has also been their Capital for a brief period. The temple and premises are currently being managed by the Ramanathapuram Samasthanam.

This holy place is said to be the native town of Lord Shiva as He was established first here. In former times, this place has been celebrated as Southern Kailasa, Chaturvedi Mangalam, Elandhi Kaipalli, Badrika Kshetram, Brahmapuram, Vyakpuram, Mangalapuri, Badrisayana Kshetram, Adi Chidambaram, etc. It is believed that praying at this kshetra will help the devotee to attain Moksha either in the present birth or the next. 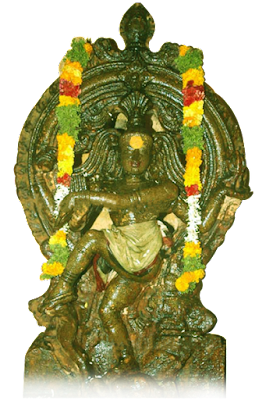 The idol of Lord Nataraja is made of Maragatha (Emerald) stone and is one of it’s kind in the world. His right side represents the male form of dance and left side displays the female form. This is the temple where the first ever Bharatha Natya form of art was ever performed and displayed by Lord Shiva and it is said only after this, He performed the dance form at Kailasa. Abhisheka is performed on Lord Nataraja only once a year on the Pournami (full moon day) with Arudhra star day of Margaseerha Maasa (Dec. / Jan.). After the abhisheka is completed, the lord is ordained with Sandal Paste which remains on Him for the whole year.

It is said that King Alauddin Khilji tried to steal the Emerald Nataraja idol when his force claimed and destroyed hundreds of temples in South India including the one at Srirangam but in vain. Lord Ganesha and Lord Shanmuga who’s shrines are located outside the Temple entrance are seen having swapped their places. The vahana for Lord Shanmugha here is an Elephant, apparently the Airavatha gifted by Lord Indra, as per the holy text of this place, Adhi Chidambara Mahatmiyam. It is said that Goddess Parvathi worships Lord Shiva here everyday. 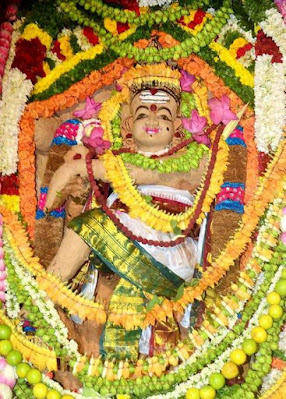 The fish found in the temple tank are those that thrive in salt water and not in fresh water! This is perhaps the temple is very closely located to Sethu Samudram - the place where Lord Rama and his Vaanara koota commenced their journey through the sea to rescue Mother Sita at Lanka.

The Sahasra Linga idol here has been established and offered prayers by 1,000 sages who attained Moksha from this temple. There are 11 Ganesha idols within the premises. There is a separate shrine close by which houses Goddess Varahi who’s said to have helped a woman for her childbirth. Due to the menstrual reasons associated with delivery, the goddess is located outside the main temple with Her own premises. Among the most Varahi shrines in the world who is said to be a boon giver to whoever prays to Her wholeheartedly. 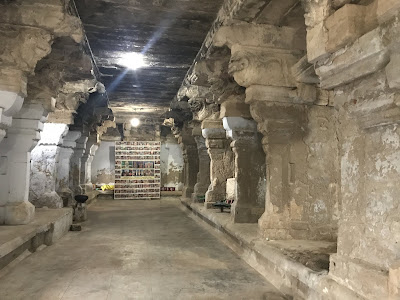 Located 20 kms from Ramnad or Ramanathapuram, it is 6 kms from Thirupullani Lord Sri Adi Jagannatha Swamy Temple and about 80 kms from Rameswaram.

Though 1,000s of pilgrims visit Rameswaram everyday and millions every year, hardly a few visit this temple. This is because a human cannot decide to visit this temple on their own. One needs divine grace to visit the first ever Lord Shiva temple on Earth. Let’s pray the Almighty that the reader of this article gets an opportunity to visit Him and seek his abundant and infinite grace and blessings!