Kumbakonam, the holy town has a very important significance for the humankind. For, this is where it all began according to our traditional texts.

Like how we cleanse the wardrobe at our homes, paint the house and refresh our material stuff, Lord Brahma, the creator also cleanses the Earth and His creations every once in a while. During one such “pralaya kaala” or cyclic existence, Lord Shiva advises Lord Brahma to pick up the holy soil from important Kshetras and water from important rivers with a coconut tied atop a pot (kumbha) and keep it safe. The pot, after the pralaya is over, rolls over to a place and stops.

A hunter breaks the pot with his bow and arrow. Water and soil spills over and the first humankind emerges from the place. The coconut becomes an idol. 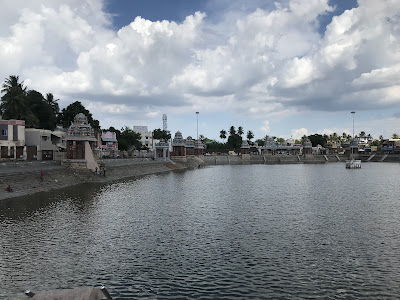 Since the pot (Kumba) settled in a corner, the place is thence known as “Kumba-kona” or Kudanthai (in Tamil) - Kudam meaning a pot.

The place where this celestial activity occureed is what is now known as the MahaMakam tank, for it occurred on the Pournami (full moon) thithi, Makha nakshatra during the Maagha maasa. Every 12 years, the day is celebrated with fervent devotion and is known as “MahaMakam” meaning the grand Makha star.

The hunter is none other than Lord Shiva who is seated alongside the tank and is known by the name “Sri Adhi Kumbeswarar”.

The main tank is spread over 20 acres of land and has 16 mandapas and 21 wells altogether. The mandapas are where the soil was strewn over and the wells are where the water from the pot sprinkled.

It is believed that a holy dip in this Mahamakam tank will remove all obstacles in our life as one proceeds in the path of dharma towards attaining moksha.

The next Mahamakam will occur during Feb. 2028. During the previous edition in 2016, over 20 lakh people visited and participated in the festivities which is spread over a fortnight. All the temple deities are brought to the tank to perform “Theerthavari” - Abhishekam to the Lords. Thereafter, devotees take a dip in the tank and visit temples.